Black Feminism in the 1980s 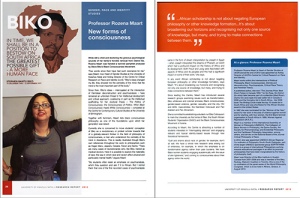 ANOTHER NOMINATION FOR THE WRITING CIRCLE

The African Studies Association honours African women writers by shortlisting then choosing a winner for the Aidoo-Snyder Book Prize, named in honour of Ama Ata Aidoo, the celebrated Ghanaian novelist and short-story writer, and Margaret Snyder, the founding Director of UNIFEM.

January 13, 2010 by Cathy Sunshine
Cathy Sunshine – yes, that’s her real name – has, erm, spread some light on post-apartheid fiction for the online magazine’s rather gigantic audience (last known absolute ranking on the web: a fearsome 819).

Fiction writers in SA, as Sunshine points out, have been broadening their scope since democracy’s advent, and thus present an illuminating snapshot of the country – as long as you choose the right reads. Sunshine includes work from JM Coetzee, Zakes Mda and Sello K Duiker, plus BOOK SA members Niq Mhlongo and Rozena Maart; here are her top ten recent SA novels:

In four weeks time, I’ll be taking part in a publishing tour to South Africa as a finalist with the British Council’s UK Young Publishing Entrepreneur award. Before I go, I want to answer a few questions: how do we value South African literature in this country? How and where do British readers interact with South African writing? To what extent does the industry nurture South African authors? Does our marketing do justice to their work? This blog will record my conversations and research before I leave the UK, and report on the book trade while I’m in South Africa.

Of all contemporary African literature, it is probably Nigeria’s which has loomed largest in the UK and US literary pages over recent few years, thanks largely to novelists Chimamanda Ngozi Adichie and Helen Oyeymi, who have introduced a younger generation of readers to an established literary tradition which includes luminaries Chinua Achebe, Ben Okri and Wole Soyinka. Two South Bank Shows were devoted to Nigerian literature in May 2009 (and specifically to Adichie and Achebe). Has the rise of Nigerian writing left South African authors behind?

Not so, says Daneet Steffens, well-travelled bibliophile and editor of Mslexia, the magazine for women who write. Daneet believes that the UK offers a relatively solid representation of writing from throughout the Commonwealth via publishers, bookstores and prizes. “What’s particularly exciting and vibrant about South African women writers at the moment,” she says, “is that there is a strong multi-generational and multi-ethnic presence, covering an intense and highly-charged time.”

Some of the writers who are particularly exciting to Daneet are Nadine Gordimer, Sindiwe Magona, Gillian Slovo, Pamela Jooste, Zoe Wicomb, Rozena Maart, Gabeba Baderoon and Rachel Zadok. “At a critical moment of the South African story, you’ve got a chorus of vibrant voices, contributing to a rich, all-encompassing narrative that’s still developing.”

I wonder how many of these writers are accessible to the British reading public. In my next blog, I’ll be reporting from the high street on the representation of South African authors in our bookstores.

South African Reviews of The Writing Circle–O’ Magazine, True Love and The Sowetan 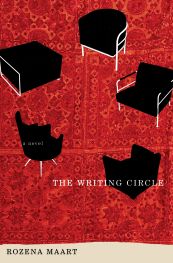 A look into the scourge of rape

This book is a novel, but it is not based on fiction, but fact, as South Africa is one of the nations with the highest number of reported rape.

The book opens with a rape that occurs in front of a home in Cape Town, where five women gather every Friday night to discuss literature.

The women are waiting in the house while one of their own is being raped at gunpoint in her own yard, in her own car.

Each chapter is told in the voice of one of the women. They all recount their personal stories, revealing their reactions to the horrific events of the present and reflecting on their past experiences.

The Writing Circle is a beautifully written, heartbreaking book that allows the reader to experience an intense empathy for each woman.

It reminds us that violence against women knows no class boundaries and that people would listen to the cries of women and girls and heed the suffering that surround them and pay attention.

The writer brings difficult subject matters facing our nation today. While reading this book I realised that all the women in this book were very concerned with safety. They had people accompanying them wherever they went.

This book explains all the many different types of rape, from that of the one who was raped at gunpoint to the case of a girl who was raped by her mother’s employer. Just because a woman (or man) is dating someone, it does not give the other the right to rape them. Just because the victim knew their attacker doesn’t make it less of a rape. I highly recommend this book to everyone, men and women.

The Writing Circle has its own page. Check it for details of the book.

I am taking bookings for the Fall/Autumn semester.

A RECORD 50 494 people attended the third Cape Town Book Fair (CTBF) last weekend. The four-day Fair, with the theme Words Create Worlds came to an end on Monday, having had 7 194 children through its doors at the Cape Town International Convention Centre.

The fair, run in partnership with the Frankfurt Book Fair and under the auspices of the Publisher’s Association of South Africa (Pasa), was opened amid a buzz of activity by Professor Kader Asmal on Saturday, as people rushed to collect tickets for the first events of the day.

Speaking at the opening press conference of the CTBF, Dudley Schroeder, executive director of Pasa, said: “The United Nations has released figures showing that publishing is the largest creative industry in the world. The book industry is 20 times bigger than the entire international film industry.”

Members of the public flooded the more than 400 events, entertained with Michael Poliza’s breathtaking slide presentation from his book Eyes Over Africa, inspired by Riaan Manser’s account of his circumnavigation of Africa from Around Africa on my Bicycle, reflecting on the TRC process with Alex Boraine in discussion on his book A Life in Transition with Mac Maharaj and Max du Preez and faced with the reality of violence against women in Rozena Maart’s The Writing Circle. There was something for everyone.

Boraine, deputy chairman of the Truth and Reconciliation Commission, said on Saturday: “This kind of gathering today is so important. It’s seldom that people have an opportunity to discuss these things.”

Robin Malan said of the panel discussion he chaired with Rozena Maart, Wendy Clark, and Anne Mayne on how violence against women is portrayed, perpetuated and/ or exposed in contemporary writing: “The three very different personalities of the panellists gave us the diverse aspects of the social activist, the legal prosecutor and the psychoanalyst in their nonetheless unified response that writing back about abuse and violence against women was both a necessary social response and an affirmation of dignity, achievable as much through the novel as through autobiography.”

Vanessa Badroodien, director of the Fair, said: “The intention to excite the public about reading was certainly achieved.” She said the link between reader and writer, which was central to the fair, came through strongly.

Using rotating perspectives, Maart shows how the women in a South African writing group react when one of them is raped. As they help her cope, they’re forced past boundaries of friendship to confront apartheid and class.